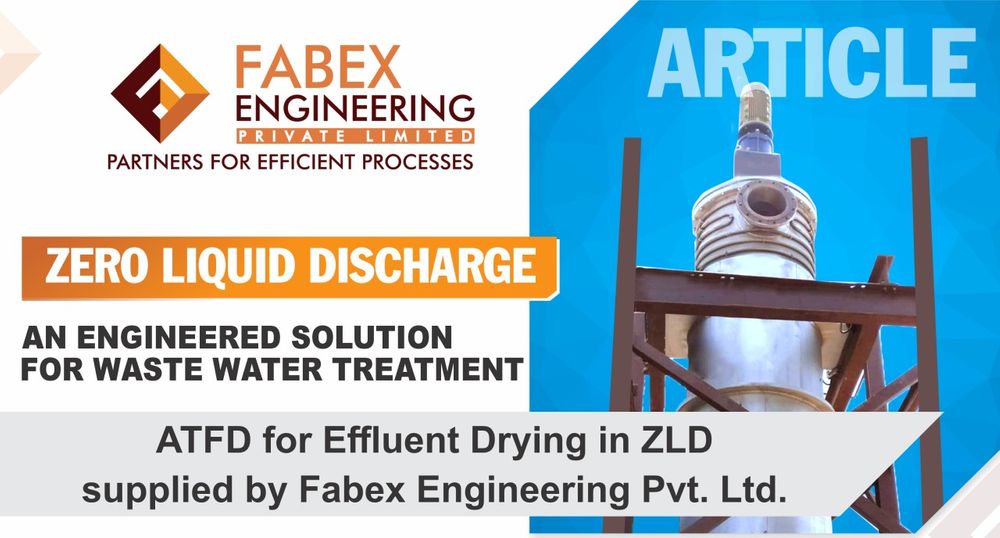 Zero Liquid Discharge (ZLD) is the most efficient way to recover water and dissolved solids with improved efficiency. ZLD is the need of the hour as strict norms with regards to wastewater disposal have been imposed and it has become mandatory for the industries to look into the treatment techniques by protecting our natural resources while simultaneously gaining revenue from the same. Fabex Engineering Pvt. Ltd. has one of the developed technologies that can enhance the quality of ZLD systems. Fabex Engineering Pvt. Ltd. has supplied its clients with Agitated Thin Film Dryer (ATFD) units, a major component in the ZLD systems that help in lesser energy consumption and improved process efficiency. The processes are in sync with the government norms, have the lowest possible life-cycle cost which helps in converting the liquid waste into disposable dry solids.

The present article emphasizes the use of ZLD units in the industries, the market analysis of ZLD usage, and how the ZLD technology has a bright future ahead by implementing innovative synergistic solutions to the problem at hand.

The availability of abundant resources increases the chances of its negligent usage, without realizing the impact it may have when the abundant lot reduces gradually. The same has happened with our natural resources; let it be land, water, environment, etc. The increase in the population has immensely influenced the utilization of these available resources, leading to their scarcity. The worst affected is water, which is a prominent necessity. Excessive industrialization and disposal of wastewater in the natural water bodies have eventually depleted the available potable water sources and the need for revival of the same has been emphasized at an emergency level. As for economic and sustainable development industries have come up with a solution of Zero Liquid Discharge which has a positive outcome not only for the environment but also for the industrial economy.

Economy and Nature in sync

21st-century industrialization aims at higher productivity, low-cost profitable ventures with sustainable development keeping our natural environment safe and healthy. One such safe option is Zero Liquid Discharge which helps in conserving our natural water resources by reusing the water used in the process thereby recovering 75-90% of the wastewater based on the technologies used. Besides, it can reduce a high part of the process economy as most of the water is indigenous and a lesser/no additional water is required from outside the industrial unit.

The ZLD uses the simple concept of EPC (Evaporation-Precipitation-Condensation). The effluent wastewater is first evaporated to concentrate the salts until the dissolved solids precipitate as crystals. The evaporation can be carried out using Agitated Thin Film Evaporators (ATFE), which generates high turbulence increasing the heat and mass transfer. The crystals formed are removed and separated generally by using a filter press but instead using Agitated Thin Film Dryer (ATFD) can help in improving the efficiency of the process. Generally, ATFD is utilized for drying heat-sensitive products and solids of good quality can be retained. The evaporated water is condensed, collected and reused for different processes. The collected solids can be reutilized in the plant or can be sold. So, ZLD systems are an efficient and sustainable solution that reduces the load on the natural water resources and also helps in generating a means of a circular economy. An important point to note here is pure water or zero effluent can be achieved only when all the dissolved salts are effectively removed. This can be achieved by utilizing a totally closed water loop. The most effective and efficient operations which can accomplish this objective are evaporation and desalination.

The perspective of looking at wastewater treatment as an imposition by Government agencies in the pretext of protecting the environment is now being looked upon as a profitable venture by generating revenue from the solids recovered and reduction in the use of freshwater, thereby reducing the burden on natural resources. Although ZLD is looked upon with a lot of hopes in attaining sustainability, it is an energy-intensive and comparably costly technique when used in a smaller unit. Tong and Emelich (2016) in their review published in Environmental Science and Technology, have elaborated about the drivers, incentives, technologies and environmental impacts of ZLD as a solution for wastewater treatment. With the developing countries pitching in since the last decade, the demand for ZLD units for the industries in the developing countries has been increasing exponentially. This can definitely pave a way for developing new technologies for reducing the energy consumption in ZLD units and bring about a rise in the profits

The increasing global urbanization has automatically influenced the number of ZLD installations. As per the market forecast, the global ZLD market is estimated to reach 1.76 billion USD in the year 2026 from 0.71 billion USD recorded in 2018.

As per the persistence market research, South Asian and Pacific countries are projected to be the most remunerative markets for ZLD business. India is expected to be the dominant emerging leader in this market with a twofold growth during 2021-2031. India at present is one of the largest and the fastest-growing economies which is expected to have a key position in the ZLD market in South Asia in the present decade.

Why is there a remarkably slow rise in usage of ZLD in small-scale units in India?

The advantages and profitability of using a ZLD unit is numerous but still, its usage is restricted to MNCs and potentially avoided by small-scale industries. The major reason is the initial cost of investment and per day usage of energy. The efficient evaporation for salt recovery requires multiple effect evaporators, that require a high amount of energy incurring a high cost. According to CPCB data, for India, approximately 13468 million liters per day of wastewater is generated by industries of which 60% is treated. The average steam required to treat 1000 liters of water per day is 300 kg. This is a reason that the government has also set up common facilities for treatment for clusters of small-scale units known as Common Effluent Treatment Plant (CETP)which can help these industries treat water but with a cost and not profits. The addition of innovative multiple effect evaporators in combination with technologies that can reduce energy consumption will definitely attract the small-scale units to apply ZLD to their existing processes more effectively.

Efforts are now being made to economize the ZLD process so as to make it a profitable venture even for the small-scale units to reap the benefits of this profitable venture. Besides, the global water treatment issue needs to be addressed by implementing innovative synergistic solutions to this approach.